Invest in Bitcoin and Ethereum 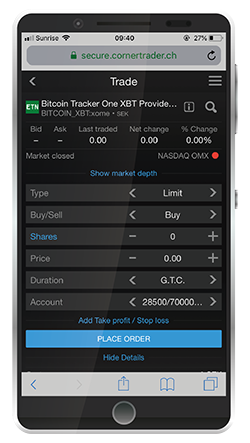 Invest easily in cryptocurrencies with no cybersecurity and storage risks. You can trade Bitcoins and Ethereum through trackers, allowing you to take the full advantage from their strong price movement without physically owning them.

These trackers are Exchange Traded Notes (ETNs) of recent issue that reflect the movement of Bitcoin (BTC) and Ethereum (ETH) against US Dollar (USD).

ADVANTAGES OF TRADING CRYPTOCURRENCIES WITH CORNÈRTRADER

This decentralised peer-to-peer payment system is based on blockchain technology and enables encrypted financial transactions that are made in the bitcoin currency. For the most part the currency is used within the system, but it can also be exchanged for goods, services or real money.

Blockchain technology –  in a variant that makes use of “smart contracts” –  is likewise the basis of the Ethereum financial system. Smart contracts regulate, for example, the conditions of transactions in the ether currency and are managed by the system participants, alongside the other tasks to be performed.

Digital or cryptocurrencies make it possible to effect cashless payment transactions that dispense with banks and are not accessible to state supervisory authorities. They are based on “blockchain” technology, a digital system that operates through a decentralized network, stores a record of all transactions, and virtually eliminates the possibility of tampering. The best-known digital currencies are “bitcoin” and “ether”. 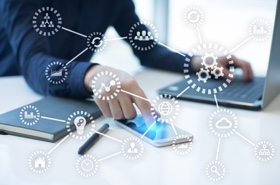 On 1 November 2008, the idea of a peer-to-peer electronic cash system was introduced in a white paper by “Satoshi Nakamoto”, a name in Japanese synonymous  with “Mr average”: bitcoin was born. While the true identity of Nakamoto - nothing has been heard of him since 2011 - has become the stuff of legends, his vision was developed further by others and, in a completely revised form, has become the basis for numerous digital currencies today.  However, the goal was, and still is, to encrypt and verify private financial transactions so they can be securely carried out and are protected against third-party access.

Blockchain: a decentralised basis for cryptocurrencies

Cryptocurrencies are based on blockchain technology, a shared accounting system that is as simple as it is ingenious. In this decentralised accounts ledger each transaction is meticulously entered, along with all stocks held, down to each individual virtual coin. The system ensures that the number of coins is limited, prevents counterfeiting, and guarantees that each unit can only be spent once. The “chain” in question is the sequence of accounting entries, which reproduces the entire transaction history and is available to all clients in the network.

Cryptocurrency vs. the monetary system

The differences as against the conventional currencies put into circulation by central banks, which then constrain or expand their supply, are striking. Cryptocurrencies consciously evade centralised control and management, based as they are on networks whose members exchange all the relevant information among each other, so creating a decentralised organisation. Further, most digital currencies limit their quantity from the very beginning. (The number of bitcoins, for example, should never exceed 21 million.) This represents an enormous advantage in comparison to fiat money and is one of the main reasons why bitcoin has been able to generate such an impressive market capitalisation.

There are now over 1,300 cryptocurrencies that are either based on blockchain technology or have further developed it. The enormous potential of blockchain can be tapped for a wide range of applications in the economy and in administration, for example in the keeping public registers (for creating a smart system to interconnect financial statements, or for transferring and securing ownership rights). Cryptocurrencies and their affiliated databases may herald a new epoch in data processing.

By their nature, cryptocurrencies do not enjoy universal approval. The main charge they face is that cryptocurrency transactions are outside the reach of the state. However, ever more companies, organisations and, ultimately, states, are opening up to these alternative payment arrangements. Bitcoin is the most noteworthy: it tops the league, outstripping  the numerous other cryptocurrencies  that have burgeoned in its wake.

Investors have a variety of ways to buy in. Unless the aim is to conduct  transactions, direct participation in the payment system is fairly complicated.  Exchange traded notes (ETNs) offer a shrewd alternative.  Banks issue them as certificates and they are traded on special exchanges. They replicate a cryptocurrency and accordingly offer exposure to its value development – sparing the need to acquire the actual currency. They can also be held and managed in securities portfolios, which makes them easier to deal with. 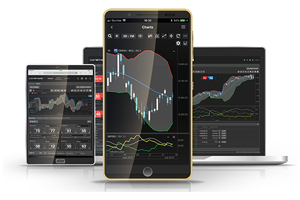 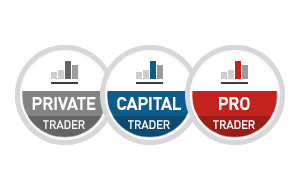 LIVE
Open a real account to trade your own money.